Making his JoFo Cup debut on Sunday afternoon at Credit Union Place, Jeriah Shantz certainly made the most of his opportunities.

He scored the game-winning goal and added another as he led Team White to a 4-2 win as a crowd of more than 200 came out to the team’s annual intrasquad game.

“We heard some great things about him coming in and we were very pleased with his play,” said Doug Hedley after the game. 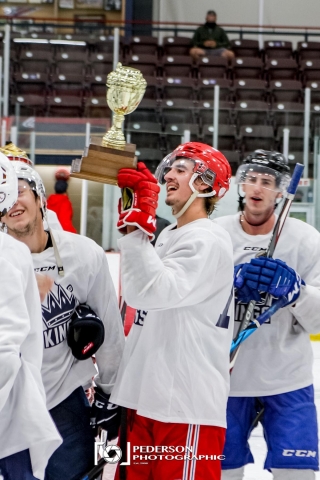 Nick Braun and Braedon Lacomy each scored one goal each in the victory while 20-year-old Kaden Bryant scored Team Blue’s two goals. The second was a snipe to the high left corner.

Dauphin’s Rylan Gibbs and Hayden Lacquette suited up in the game while Jayden Jubenvill of Gilbert Plains and Aiden Brook of Roblin rounded out the group of four Parkland players in the contest.

The team will now enjoy a day off on Monday after three intense days. On Tuesday, they welcome the Swan Valley Stampeders to town for their first of three preseason games and first of three games in less than a week. They’re in Swan River on Thursday and in Waywayseecappo on Saturday.